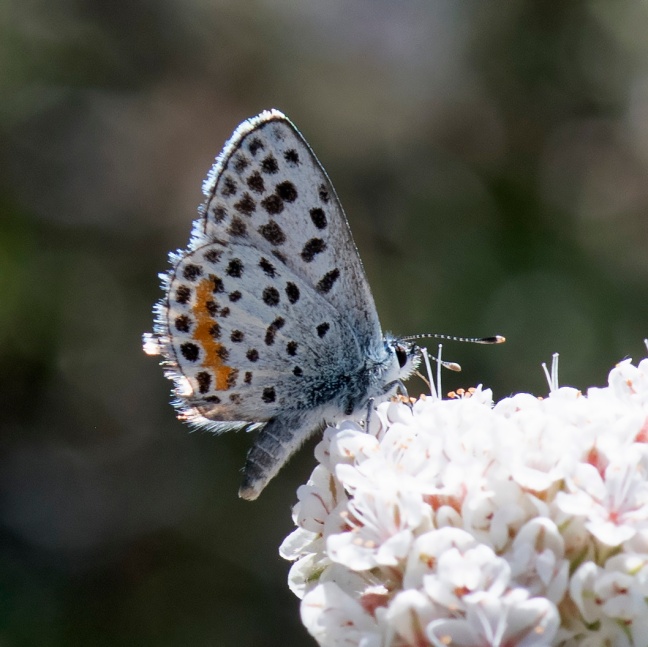 Bernardino Dotted-Blue butterfly (Euphilotes bernardino)
shown in the header image above:
Bernardino Dotted-Blues are all over the buckwheat just now.  These tiny butterflies are a Southern California specialty; their range extends only a little bit into northern Baja California, southern Nevada, and western Arizona.  Buckwheat is not only their preferred nectar plant, it’s the host plant for their caterpillars.  In our area, they usually only fly in June and July, so now is the time to check them out! 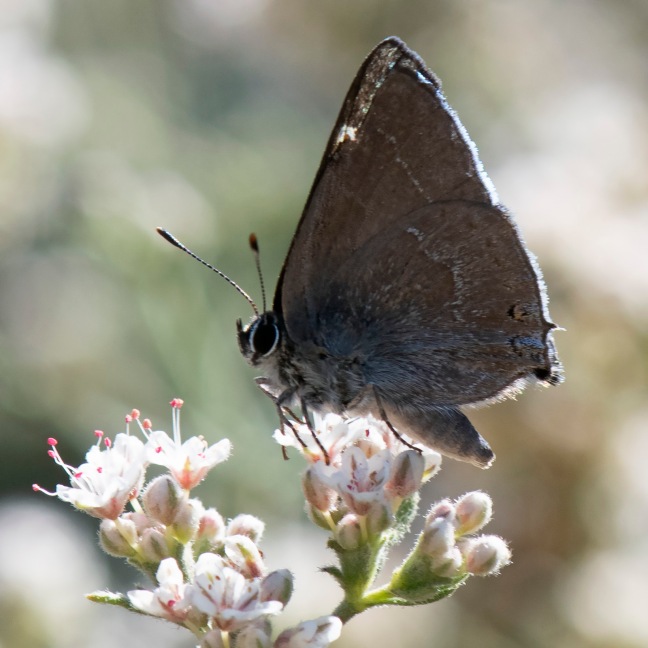 As the name implies, the host for Mountain Mahogany Hairstreak caterpillars is Mountain Mahogany (Cercocarpus montanus), but the adults love to nectar on buckwheat.  Like the Bernardino Dotted-Blues, these butterflies only fly in June and July.  Look for a brownish-gray butterfly with a white streak on the wings and a little “tail” on the hindwing. 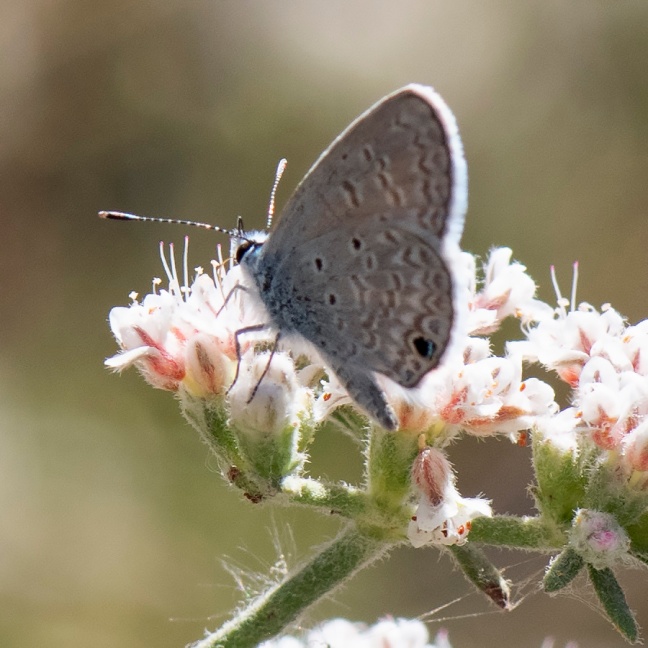 The Ceraunus Blue butterfly is seldom found in this area; its normal range is south and east of here in South Texas, Florida, Mexico, and Central and South America.  This year, however, a number are showing up in our area.  Look for small bluish-grey butterflies with a series of darker dashes on the wings and one or two “eyespots” near the bottom edge of the hindwing. 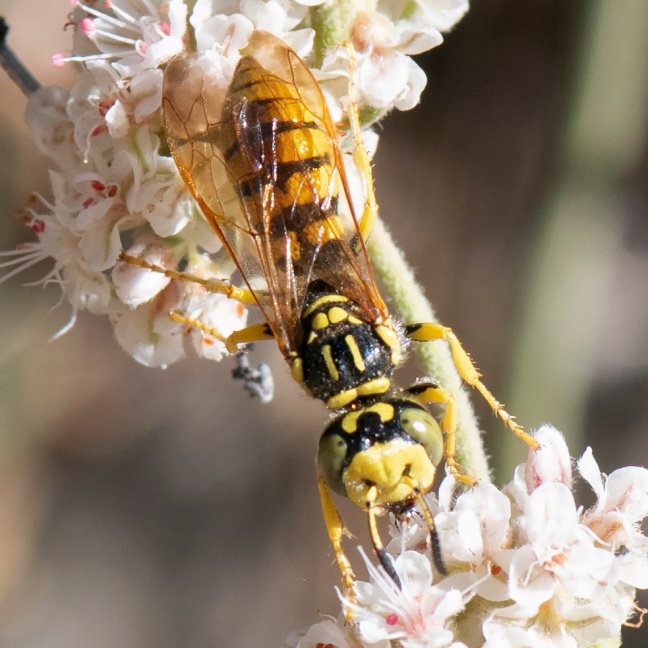 The Pacific Burrowing Wasp is a “beewolf”, a solitary, predatory wasp that preys on bees.  Female beewolves dig nests in the ground, then hunt bees, which they place in the nest.  They then lay their eggs on the bees, which become food for the larvae.  The adults, however, eat pollen and sip nectar.  These colorful yellow and black, green-eyed little wasps won’t bother people – just bees. 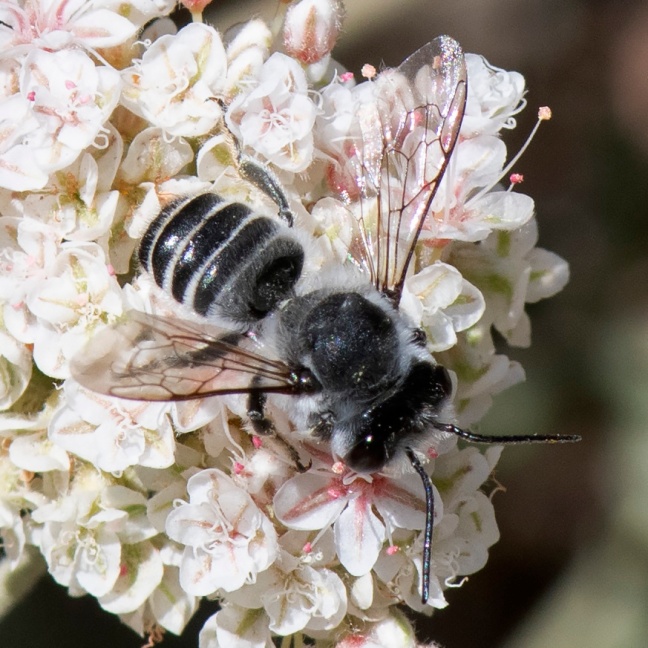 Leafcutter Bees do not live in hives like honeybees; they are solitary and usually nest in pre-existing holes in wood or hollow stems. Females typically cut neat, round pieces out of leaves to serve as separators between cells in their nests.  They collect pollen to feed their young.  Unlike honeybees and many other bees, which have “pollen baskets” on their legs, female Leafcutter bees have a furry abdomen for collecting pollen.  (If you see a bee with a yellow tummy, it’s probably a Megachile.)  When the female Leafcutter bee returns to the nest with pollen and some nectar in her crop, she kneads the mixture into a bee loaf, adding some of her saliva, which may contain antibacterial and fungicidal substances.  After repeated trips to build the large enough bee loaf, she will lay an egg on top and seal the chamber with chewed-up leaves.   Leafcutter bees are good pollinators and unlikely to sting.  If you’d like to attract some to your garden, you might try putting a “bee hotel” near some flowers; a Megachile may move in. 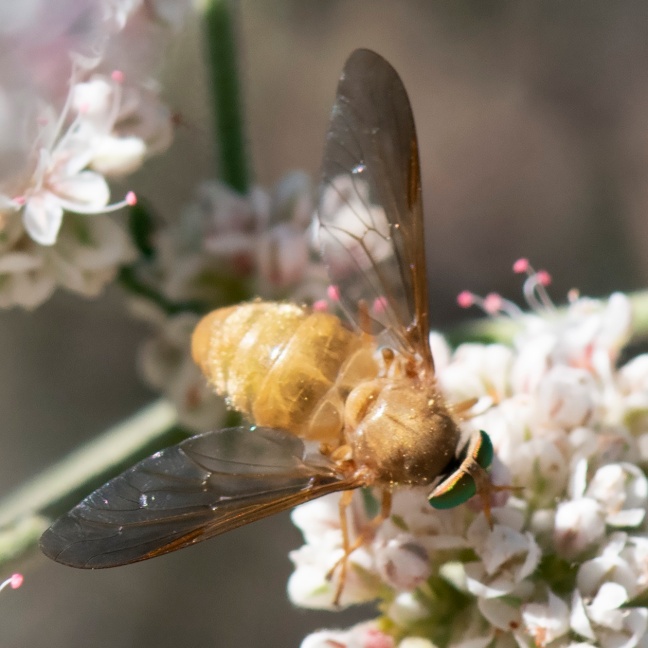 These green-eyed yellow flies actually belong to the insect family of Horse and Deer Flies (Tabanidae), but unlike typical members of this family, Pegasomyia do not drink blood; they eat pollen and drink nectar from flowers.  A vegetarian Horse Fly – who knew! The bright colored eyes are iridescent and can look red or green depending on the viewing and lighting angles. 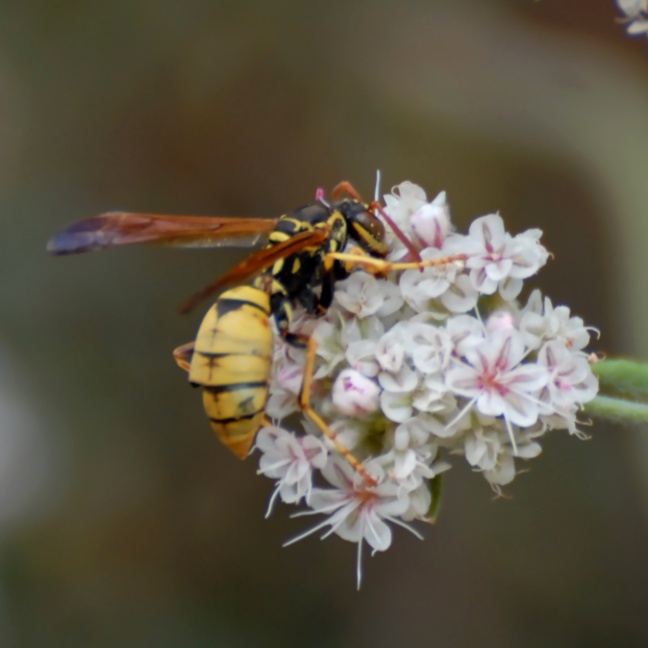 Female Golden Paper Wasps lay their eggs in cells in the familiar “paper” nest, then when the larvae hatch, they hunt caterpillars to feed them.  Interestingly, they don’t sting their prey, but use their powerful mandibles to chew the prey into pieces to feed the larvae.  The adults, like the one here, generally take nectar. Golden Paper Wasps are generally not aggressive and are unlikely to sting unless provoked.  They can actually make a nice addition to your garden, as they will help to control caterpillars.

If you look, you will find even more different insects on Buckwheat in the Park.  What have you seen?  Let us know!  Email (and send photos, if you have them) to info@friendsofthewildernesspark.org.